Breaking the Legacy of Silence #12

When I was 17-years-old I met my first husband while camping in the Florida Keys. I was a third wheel on a two-week trip with my sister and her boyfriend, who eventually became my brother-in-law. We spent first few nights camping at John Pennekamp State Park in Key Largo, FL. My ex was there taking a scuba class before his first semester of Veterinary Medicine school started at Oklahoma State University.

One night, while my sister and I were sitting at the picnic table by our tent imbibing in a lot of Sangria, I noticed him walking by several times. He had a cute smile. Eventually we invited him over.

Within the hour I was smitten. He told us he was from Oklahoma. “Where’s that?” I asked.

With what I later learned was his trademark smirk of superiority, he said, “It’s that state just north of Texas, shaped like a panhandle. You do know what a panhandle is, right? I mean, you live in Florida.”

Karen and I giggled, a little nervous and already feeling less than.

Barry had a way of doing that, like the time he first came to our home in Tarpon Springs, where we lived with our mom and step-dad. When I drove into the small neighborhood situated along the Gulf coast of Florida with him in tow from the airport, he snickered and said, “This is a nice lower-middle class neighborhood.”

At the picnic table in Key Largo, stunned at his sarcasm, Karen and I shrugged in reply to his barbs.

“Now you,” he pointed to my sis, “have a very symmetrical face.” She stared at him like he’d lost his mind.

“What?” I said, wondering what the hell this guy was talking about.

“You’ve got a crooked smile. You should part your hair on the side, you know, to offset it.”

Karen shot me a look. What the fuck? “Kim is the pretty one. At least, that’s what our family always said.”

I looked down at my plastic cup filled with Sangria and stroked my cross bite, wondering why anyone would think I was pretty.

“Oh, you’re both pretty. It was just an observation.”

Desperate for love and approval, I gave him my phone number when he asked for it. Karen told me later she thought I was nuts.

Robert echoed that sentiment. When he arrived on the scene after being who-knows-where for several hours, he immediately began to challenge my ex. Right away I knew he didn’t like the guy. After Barry left our campsite, Robert told me I should stay away from that piece of shit. I didn’t like anyone telling me what to do, so I did the opposite.

After a year of letters and phone calls, and a couple of visits back and forth, I moved to Stillwater, Oklahoma the summer before my 19th birthday. Several months later, I was pregnant…then married, and too young and stupid to know what I was doing.

The first day I arrived to his little trailer south of Stillwater, there were pictures of his ex-fiancé all over the house. Yes, pictures of his ex-fiancé, in frames, in every room of the place. That should have been my first clue. Yeah, Barry was a charming fellow, fun to be around, and someone you just wanted to know. He had a lot of friends, and many of them were old girlfriends.

I was expected to not only accept this, but like it. I was also expected to be friends with his ex-girlfriends. This did not sit well with me, but being young and eager to please, I tried very hard to do just that.

Over the short year we were under the same roof, he brought several of his female classmates over to study for their brutal exams. I often came home from work to find him and his classmate in the study, with the door locked. The lights were out, too. It must have been hard to study in that darkness. When I said something to him about it, he told me I was insecure and crazy.

That marriage was short-lived, even though we had a child together. I re-married someone I felt was pretty safe. He was not the kind of person who kept in contact with his exes, and he was pretty steady. Thomas didn’t flirt with anyone, even me. The thing is, I was heartbroken over what my first husband did, and it took me a good part of my second marriage to get over it. Our marriage was an unfortunate casualty of that screwed up mess. We had two beautiful children together, so it wasn’t all in vain.

After that marriage ended and I had what I can only call a collision with my youngest child’s dad, I knew I was finished with men for a while. At least, I should have been.

I started seeing a man who was quite charming and exciting, and he seemed to be just as crazy about me. The truth came out later that he had a couple of his ex-wives on the side the entire time, and when I confronted him about it, he beat me up, nearly putting me in the hospital.

I removed this douchebag from my life at that point. Afterward, several years of depression culminated in the deepest, darkest time of my life when my kids all scattered and I ended up in a hospital in Tulsa, OK recovering from major surgery on my heart. I was alone. No one was there to comfort me before or after the surgery. There was no place to go. Not even my own mother would take me in. She said it was because my step-dad threatened to divorce her if she did, but I remained skeptical.

That should make you re-evaluate your entire fucking life.

Years afterward I decided to try trusting in someone again, only to find out near the end of our relationship that he was seeing his old girlfriend the entire time we were together. This was getting old.

When I met Alabama, I told him up front how I felt about things. I didn’t want a fling, to just be a good time. And, I said, I didn’t want him to get into anything with me if he wasn’t sure about how he felt about his ex-wife. His dad was diagnosed with terminal liver cancer about the time we started seeing each other, and he told me he was an old-fashioned guy. Alabama wanted a woman he could count on and he wanted to get married.

He wanted someone to take care of his needs, that’s for damn sure. Reciprocity was not his thing. I hauled-ass after his dad’s funeral, avoiding another failed marriage, and went to my aunt and uncle’s home in Georgia to nurse my wounds. I let them love me until I could stand to look in the mirror once in a while without loathing the person looking back at me.

So, why would someone trust and love again after all of that? Why would anyone put themselves in a position to get hurt time after time?

I guess I was born an eternal optimist, and a dreamer, and harbored hope that someone out there may love me, just as I am. Some have called me stupid, irrational, and unstable. Others have said things which are not repeatable here. My last ex-husband used my history of fucked-up relationships to get our child away from me as much as he legally could. He conveniently left out our clusterfuck of a marriage, and his history of notorious rage-fests, when he took me to court the last time. Good for him, but Karma is a bitch, Bitch.

What I finally had to do was love myself. This is not rocket science, but with a portfolio of scars like mine, it was hard to do. Sometimes I still struggle, but more often these days, it’s not difficult.

Trust remains in short supply when you’ve been hurt and betrayed. Trusting myself also became the next goal. I had to hone in on, and discern, the voices of others amid the noise of own mind and heart. Once I could hear myself more clearly, I could trust in my instincts, and finally realize my decisions wouldn’t all end as disasters.

About the time I reached this place, I met my husband, John. Neither of us were looking for a relationship, and we were both so over marriage we had no intention of going near that bitch again. But you know, fate had other plans.

When I first saw him, I saw his heart, which was as they say out west, Bigger Than Texas. I knew this guy would love me and allow me to continue my journey of loving myself without putting up stupid roadblocks.

We’ve had some great times, and we’ve navigated some sharp edges. He’s the perfect companion—a calm and reliable anchor when the storms of my mind and heart rage out of control. When I sink into the abyss of self-doubt, sorrow, anger, and fear, John never waivers. He’s there, ready to hold me, to reassure me of my worth when I can’t do it for myself. When I’m a thorny wench, he tells me, but he keeps loving me just the same.

John has done more to encourage and support my transformation as a woman, human being, and especially a writer, than anyone in my life thus far. He wraps his cloak of unconditional love around my often prickly exterior until I’m ready to slough off the pain and anger and get back to the business of realizing my purpose.

No one has gone unscathed through this life. Some of us, more than others, have more scars to show. We’ve all been hurt at some point by someone we thought would never hurt us.

So, I guess it’s important for us to be patient with each other.

We each are the places we have been.

We are who we are today because of it, though, and that can be a very good thing, despite the occasional thorns along the way. 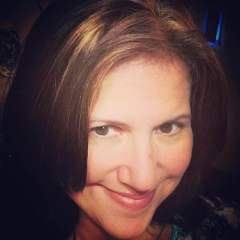