Breaking the Legacy of Silence #5 Why I Write 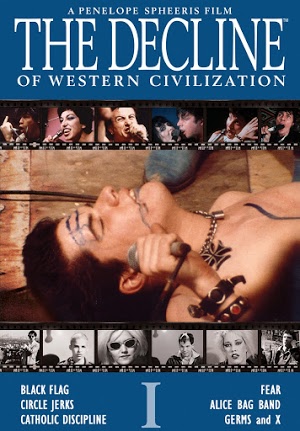 The Perpetual Decline of Western Civilization, and the Ascendency of Punk-Dystopia

Let’s face it: Western “civilization” has always been in decline. In particular, the U.S. was founded on genocide and slavery, and to this day perpetuates a program of imperialistic bullying, so one cannot very easily make a rational argument for the purity of the country.

Imagine, however – for fun! – what the founding fathers might have thought about punk rock – the ultimate protest against a society in incessant decline. Sure, there have always been means to defy corrupt governments – marches, riots, boycotts, coups, and so on – but punk as sonic dissent is a relatively new and novel approach.

Of course, that’s the implicit thesis of Penelope Spheeris’ (recently reissued) documentary dissertation, “The Decline of Western Civilization.” Punk was the canary in the coalmine, the cacophonous tirade that ranted against an unscrupulous establishment and foreshadowed further adversity.

Late 1970s and early 1980s LA bands like the Germs, Black Flag, Circle Jerks, Fear and X, whether consciously or not, existed as the anarchic antithesis of a mock-normal society, one which pretended to be well-adjusted but was ultimately steeped in psychosis. Bigotry, greed and violence were the tenets that reigned and gave tumultuous birth to punk rockers, around whom coalesced a movement of mangled mirth and marvelous madness.

The first disc in Spheeris’ much-vaunted trilogy captures these above-named punk bands just as they were gaining notoriety – and thus were at their zenith of raw vigor. In the first disc, it’s especially rewarding to witness the ragged intensity of the Germs as their star was beginning to rise – all the while painfully aware, of course, that Darby Crash would soon crash and burn, like his prophetic namesake. Too, it’s fascinating to observe the band members of the legendary X in their early element, playing their own beatnik incarnation of punk, and partying in feral fashion. And, of course, there are the kids who imbue the scene with Meaning, as they flail about chaotically to the crass rhythms and crude screechings of the punk provocateurs. And let’s not forget the charismatic “light bulb kids” whose nascent nihilism is sharply undercut by their adorable youth.

Fast forward to the third disc. (Yes, I am implying that you can skip “Decline II” – “The Metal Years.” Watch it, but after you have seen the first and third. It really doesn’t fit the narrative, and the title is a misnomer, to boot. Most of the bands in it are more “glam” and “hair metal” in nature, and most have not crafted enduring, influential music like those in the first disc. Too, the metal music and scene is more hedonistic, a glorying in capitalistic excess – the apex of a corroded system, whereas punk (real punk) was a rebellion against that. The disc is only worth watching to witness the meandering mumblings and inept cooking of Ozzy Osbourne.)

For it is the third disc which evokes the most pathos, and shows how the raucous punk scene of the 70s had crystallized, by the late 90s, into something even more existentially charged, owing to a sadistic sociopolitical landscape where poverty had become pervasive and the beatific-seeming family unit had devolved into a child-abusing entity.

Because, you see, by the time the third disc in the “Decline” series was made (1997-1998), Presidents Reagan, Bush and Clinton had colluded to erode the rights of the people and quash the few democratic ideals that had managed to pierce through to an otherwise quasi-democratic country. So by the late 1990s, “gutter punks” in LA had become common, and Spheeris aimed to capture the disconcerting phenomenon.

It turns out, of course, that contrary to popular perception, which held that these punks were anti-social slackers, these kids were actually products of horrifically abusive home environments. They were drawn to the punk scene because the music gave vicious voice to a sub-culture of societal outcasts.

Unlike in the first “Decline,” which focuses mainly on the music and somewhat tangentially on the fans, the third “Decline” focuses largely on the plight of these “gutter punks,” while the music retreats a bit in the background. We do get to know bands such as Naked Aggression, Final Conflict, and The Resistance, but it’s the punk fans themselves who tear holes into our hearts. Squid, Spoon, Troll – these kids are such a complex mix of tough and tender. Just beneath their street swagger are squishy sweet souls.

If first film in the “Decline” series is subversive for its daring to capture the shocking social phenomenon of punk rock in the late 1970s and early 1980s – one that would prompt notorious LA Police Chief Daryl Gates to attempt to ban screenings of it – then the third one is subversive for the opposite reason. Spheeris is expected to merely continue her thread of showcasing emerging, somewhat disturbing bands, but she doesn’t. Halfway through shooting, she realized that the real story for the third “Decline” lay not in the modernized incarnation of punk, but rather in the distressing conditions of those who populated the surrounding scene.  Perhaps fans of the original two “Decline” movies were disappointed in this decision. Perhaps the director’s difficulty in getting funding for the third “Decline” was based on a presumption was that no one would want to see a bunch of smelly freak-kids who should just get out of the gutter, clean up, and get a job.

The economic situation in the United States has surely decayed since the last “Decline” was made, and one can still see groups of vagabond punk kids with their bulky piercings, filth-encrusted t-shits, scrolls of tattoos, and hater-stomping combat boots, hanging out in large urban centers at gas stations or in alleyways. Indeed, one can see many more homeless people in general, thanks to unaffordable housing, lack of jobs, defunding of mental health and drug rehab programs, and so on.

In “Decline of Western Civilization III,” Spheeris doesn’t merely paint a sympathetic portrait of homeless youth; she has produced one of the most compellingly compassionate documentaries ever made, one that shames anyone who has ever callously dismissed homeless kids as mere “gutter punks” not deserving of our humanity. That Spheeris later became a foster parent to some of these hapless youth just proves she wears her heart safety-pinned onto her leather jacket, in solidarity with her subjects.