Sincere Advice From A Girl Whose Life is A Mess #2: 3 questions | Kolleen Carney What a week. Because I turn in these columns on Tuesdays, the last time I wrote to you, the country was not in as much turmoil as it is right now. We are all tired, scared, defensive, and confused, and we need our support systems now more than ever. I don’t think I know anyone who is actively engaging in self-care, including myself; I sleep like shit, I don’t drink enough water, I do drink too much alcohol. But self- care is so, so important. Here, I’d like to link you to two sites that may be helpful: You Feel Like Shit (http://philome.la/jace_harr/you-feel-like-shit-an-interactive-self-care-guide/play) and this checklist made by Tumblr user eponis called Everything Is Awful and I’m Not Okay (http://www.popsugar.com/smart-living/Self-Care-Printable-39297908). Hopefully small steps towards bettering ourselves will allow us to be strong in what seems to be shaping up into a daunting four years.

Q: I am a painfully shy person with an extreme form of social anxiety, which sometimes comes across as angry or asocial. This is a problem for me because I really do like people; it’s myself that I don’t like. What are some ways I can learn not to worry so much? How can I overcome my shyness and learn to love myself?

A: Ah, the brain. It never seems to shut off when we’d like it to, right? I myself am crippled with self-doubt and obsessive worrying, which I mask with self-deprecating humor and sarcasm. It’s been working for me, I guess. But I am not you. And I don’t suggest starting to be a very sarcastic person; my friends list on Facebook sure has suffered because of it.

One thing that I have learned over the years is that keeping track of all the things that do make you proud, accomplishments from getting out of bed in the morning to getting a promotion at work, will make your confidence blossom. The trick is to write it all down. Get a journal and write down everything that makes you happy to be you. This might be hard at first, but the more you analyze yourself, the more you’ll realize things that you may have been discounting due to your anxieties. I also suggest writing down goals for the next day. I used to do this on index cards at night before bed; I would write down at least five things I wanted to accomplish the next day with the caveat that if I didn’t get to all of them, it was no big deal. You would be shocked to realize how good you feel about yourself when you can accomplish even one thing on your list. Keep it only day-by-day, though. I tend to get lost in the shuffle of life if I try to plan out a month of goals. I also suggest checking out those self- care links above; the better you feel, the better you feel about yourself.

You’re always going to worry about things, but you have to remember that you can’t control everything. There’s stuff in this world that will happen beyond your grasp. The best thing you can do is, as the narrator says in Fight Club, let that which does not matter truly slide.

As for other people: it’s not the quantity of friends you have, it’s the quality. True friends will understand and like you despite your social anxieties, and if they don’t, you don’t need them! Surround yourself with those who care about you, especially when you’re down. They’re going to be your support system, and you will have to rely on them from time to time. Remember moving forward that it’s ok to say to new people, “I am shy, so please forgive me if I am quiet”. Remember that some people out there suck and will not want to be your friend. But also, remember that those who do are such a magical gift, and to cherish them.

Loving yourself is hard; god knows I don’t have a grasp on it yet. But every day you can make an effort to be easier on yourself than you have been. And in the divine words of RuPaul, If you don’t love yourself, how the hell are you gonna love somebody else?

Q: I am traveling with my SO for the holidays and am finally going to meet his family. Should I bring some sort of “thank you” gift for inviting me into their home? I am really bad at this.

A: Oh, man. Things must be getting pretty serious if you’re meeting the fam! I guess the best thing to do is to ask your SO what his family would like. Are they drinkers? A nice bottle of wine may suffice, though wine given as a gift should never be for the dinner itself, but for their own enjoyment. If they’re candy (or nut!) people, why not a decorative jar (mason jars are really popular still!) filled with their favorite treats? If all else fails, offer to help prepare the meal or tidy up afterwards! Hosting a holiday dinner is so overwhelming, your kindness is sure to be appreciated. Good luck!

Q: My daughter was a staunch Bernie Sanders supporter during the primaries. In fact, my entire family was. Her boyfriend purposely chooses to stay ignorant about politics; I have a feeling it is due to his father’s Republican/ conservative views. Now that Trump has won the electoral college, my daughter, who was passionately against him, has suddenly begun to hold out hope that he will be a successful president. This is causing a lot of stress between her and other members of our family. I know her boyfriend isn’t influencing this change of heart, so what gives? It is stressing us all out!

A: My knee jerk reaction to this situation was to tell her to knock it off and/ or ban all political talk from the house, but what does that solve? I tend to love my echo chamber of like- minded people who think (read: realize) a Trump presidency is a disastrous thing, so I often have to remind myself that censorship is not a good thing.

But if she had been a die-hard Bernie supporter, where is this 180 coming from? A Trump win is an assault on human rights, and his platform was built on greed, misogyny and racism. Those are huge anti-Bernie ideals. It’s almost mind boggling that she has adopted a “wait and see” attitude towards a man backed by the KKK.

I am wondering if this is a defense mechanism, a coping tactic. If your daughter is an empathetic woman, this win may have really scared her. It’s impossible to ignore the vitriol coming from all sides of the political spectrum. It is really hard to deal with it at all (the National Suicide Prevention Hotline* has seen upwards of a 200% spike in calls in certain states since last Tuesday). Perhaps her “wait and see” stance is coming from a place of self-preservation, because the alternative reality of a divisive four years is too much for her.

Or, maybe she’s been reading a whole bunch of Breitbart articles and, as they say, has sipped from the Kool-Aid font.

Either way, she is still your daughter, and you know her true spirit. If you can, sit down and have a talk with her. Tell her you’re just trying to understand why she’s turned on this issue. Don’t be angry, just listen. So many people are losing family members left and right over this issue, but if you can both listen to each other, it may be helpful.

I publish all questions with a veil of anonymity. I would never want to expose someone, especially if their question is a sensitive one, such as domestic violence, sexuality, and the like. Therefore, I may edit questions down if I feel they are too specific, but please keep in mind that I am considering the whole picture when responding to you.

The advice given is for informational purposes only and is not meant to replace the legal, financial, medical, or professional advice of trained specialists. 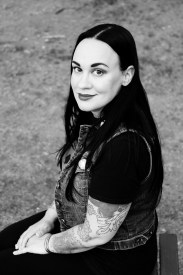 Kolleen Carney is a Boston- born, Burbank- based poet with a B.A. from Salem State University in Salem, MA, and an MFA in Poetry from Antioch University Los Angeles. She has served on the editorial team for Soundings East, Lunch Ticket, Paper Nautilus, and Zoetic Press. Her poetry and other writings have appeared or will be appearing in Currents, Vision/ Verse, Lunch Ticket, MassPoetry.org, Golden Walkman, The Watershed Review, Incredible Sestinas, Uno Kudo Vol. 4, A Quiet Courage, Yellow Chair Review, Drunk Monkeys, Odyssey, and Five 2 One. She is obsessed with California, Pez dispensers, and macarons. Her website is www.kolleencarney.com.