Sketchophobia # 6 Why Whoever is President Doesn’t Matter | Lexi Spino So the past two weeks for me have been this busy chaotic mess of being wrapped up in my own personal life. So essentially, I am a typical American. Between my new work schedule, my home life, the constant battle of me not being able to let go the one person who is most likely the worst for me, and trying to force myself to write new poetry and get set lists together for shows…I just didn’t have the time to even think about voting.

Okay, there is some sarcasm in that last sentence. However, I am not registered to vote. I have never gotten into politics my whole life. About a month before I turned 18 I believe I said to my mother, “I am not registering to vote, I think I just want to sit back and watch humans destroy themselves from the sidelines.” To be honest, that has worked out wonderfully for me over the years, if it is one thing humanity is great at, it’s destroying everything we have worked for. I’m not sure where I stand on the whole “every voice is heard”, “not voting is a violation of everything Americans have fought for over the years”, whatever have you on all the things you could put in my face for my standpoint. I don’t tend to have very much to say about much of anything…however what I do believe and stand for I feel very strongly and passionately about. So I am finally, now that the election and bullshit is over, state my opinion and “let my voice be heard” if you will.

I am going to start with a disclaimer, that I am not some crazy conspiracist either, although some of what I state in this may come off as some crazy stoner the whole world is out to get you and wal-mart is behind it all type bullshit. [Yes, that is real. Someone very dear to me drunkenly spent 20 minutes explaining how Wal-mart is part of some conspiracy to help take over society and keep us all docile.]

First off, I want to start this out by how funny I find it that nobody cared much about the election [at least from my understanding] heavily until about a month before voting day came about. I know this because Facebook has become the new instant fucking bible of the world. About a month and half ago all of a sudden everyone and their mom had something to say about the condition of their country and god fucking damnit was their opinion fucking law and Jesus did we need change. Like okay Stacy just a week ago all you were posting about was how your boyfriend shouldn’t be liking Suzie’s new profile pic if he loves you and fucking Joe all your posts were about how awesome Jeeps were and everyone should own one…now all of a sudden I open up my newsfeed to see everyone is a caring super involved citizen. NOT to discredit the few people I know who actually are super involved with society and making where we live a better place, because those people do exist and I support them heavily. But let’s be honest, in about another month all anybody is gonna be posting about again is dog memes and their relationship issues. Humans have become way too self involved for anything bigger than themselves and their small little world they surround themselves with to ACTUALLY matter. So eventually most people will go back into their daily lives and their own personal insignificant issues without a second thought.

The other side of this is that the actual one person who is president doesn’t actually control everything anyway and come on election campaigns are mainly a crock of shit. It’s just a show that is created as basically entertainment and something for people to fight each other over. Because, if we are fighting each other then we have no unity and if there’s no unity we are much easier to control as a whole. The people in background of the government are really the ones in control of everything, not the one person they decide to make the “face” of America as a distraction. No matter who is in office nothing will happen in our country that the ones in the background don’t want happening. Who these people are I couldn’t tell you, if I knew I probably wouldn’t be writing this. I think what we all should be focusing on is coming back together as a society and supporting each other instead of shoving our personal beliefs down each others throats and shunning anyone who doesn’t think the same as us. The way we are now is how the government wants us. We have already been made docile and separated through technology. Social media itself has created such a disconnection to the world. We lack actual real human interaction, we lack interest in real issues and the real condition of our country, state, town, what have you because all that matters is the screen in front of us. Whoever is really running this country wants us to stay divided. This election in my mind is total proof of that, seeing as who was running for presidency caused so much of commotion that we are all gonna end up split on sides for years now way more intensely than before. If we all could just take a step back and look at the larger picture it really makes sense…we won’t make this country better until we come back together again. It’s never just up to one person, it’s always been up to all of us.

There’s also just the simple fact that no matter who is president they can’t just change whatever they want, it has to be passed through congress and all that bullshit and the process isn’t simple and fast either. So really there is no huge crisis to be freaking out over with our world going to shit now all of sudden just because Trump is now moving into the White House…well actually there is. It isn’t him we should be freaking out over, it’s the fact that our country has already been going to shit, there have already been huge issues going on…so I think we should be asking ourselves…what do those people in the background got going on that needed this big of a riot and distraction for?? 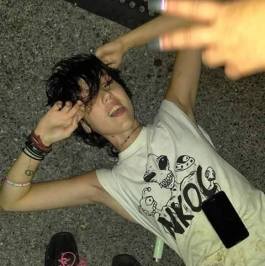